“Oh my, what a marvelous tune. It was the best night; never would forget how we moved. The whole place was dressed to the nines, and we were dancing, dancing, like we’re made of starlight.” –“Starlight,” Taylor Swift

Last Saturday, I had the wonderful opportunity to go see Taylor Swift’s “Red” tour with some of my friends. (The same people from this post.) I wasn’t originally planning to go, because Taylor’s Chicago tour stop was at Soldier Field and I thought the acoustics would be bad. But when my friends told me they had an extra ticket because someone else couldn’t go, I jumped at the chance, realizing Taylor’s concerts are always awesome, and she wouldn’t let the acoustics be bad because she puts such pride into her sound quality. And I definitely wasn’t disappointed!

You may already know of my Taylor obsession, from several posts I’ve made in reference to her. I’d been to her “Fearless” and “Speak Now” concerts, and I’m so glad I got to go to “Red,” too.

Let me start from the beginning with a brief explanation of my love of Taylor. As you probably know by now, though I try to convey the utmost professionalism on this blog, I cannot hide that at heart, I am an obsessive fangirl. I can’t just “like” something; it’s more like this:

And when I’m disappointed, it’s like this, for at least a week:

Dr. Who is disappointed on Outspokentoken’s Tumblr

So, you see, I am a certified fangirl of Taylor Swift. Her string of relationships aside (I think she needs to focus on a “steady burn” rather than continual “sparks flying”), I think she is a fantastic role model for girls and women everywhere. She’s not afraid to express herself, advising us all to “speak now” or else we might never get the chance. Sorry for the constant song-title puns, but she’s so quotable. I love that her music is empowering for women, telling us not to embarrassed to be silly, in love, lonely, depressed, giddy, etc.—that the only bad thing you can do is stifle an emotion. She celebrates all the highs and lows of life, teaching us that even sadness can bring a gift: a brilliant song (she’s so jelly-side up!).

For me, what I love most in a song is the lyrics (unless it’s instrumental only!). Though I usually stay away from pop music and thought I hated country, Jennifer introduced me to Taylor Swift with “Love Story.” I resisted at first, but I was hooked. There’s something about the way Taylor captures emotions with words, like a scent in a bottle. It’s always raw and honest.

So now that you understand why I love Taylor, let’s talk about her concerts. “Fearless” and “Speak Now” were both mind-blowing for me, especially the latter. Her performances are very theatrical and engaging for the eyes as well as the ears. I think “Speak Now” is my favorite record of hers, probably because it’s the one that she wrote completely by herself. The songs, and thus the performances, were explosive and dramatic. Although I do love all her records, I think she branched out the most with “Red,” creating an eclectic mix of rock and pop–not so much the fairy-tale country she’s been known for. I was very interested to see how she would make these songs come to life on the stage.

As I mentioned, I was worried the acoustics would not be good. I’d seen a previous concert in a baseball field, and it was hard to understand the band. (Also a country concert; yes, surprise surprise, it is now my favorite genre, outside of classical/Broadway.) I think a stadium is just not designed for music presentation; the sound goes into the air instead of bouncing off the walls and ceiling in that just-so way. I was very impressed with the results versus my expectations, though. I could understand Taylor, though it wasn’t quite as good as the sound of her previous concerts. I did have to use earplugs occasionally, whereas I didn’t have to in her previous concerts (I have extremely sensitive hearing; it is my blessing-and-curse superpower, like my 24/7 editorial mode.) Usually, though, I had a pretty good warning of when I’d need to insert them. “Chicago,” she said. “Do you know what I’d really like to hear?” *a murmur crescendos through the crowd* “I’d like to hear what 50,000–” *insert plugs* fans screaming for ‘Red’ sounds like!” *50,000 fans scream*

With that level of enthusiasm, with so many tens of thousands of fans, I understand why Taylor chose a stadium for her Chicago show. I’d still give the sound a 7/10, whereas her other concerts would get a 10/10. I’m not putting them on the same scale as a classical concert, of which I’ve been lucky enough to see dozens. For classical concerts, you go to hear the music, crisp, clear, pure. For any other concert, I think you go for the energy, to scream and sing and dance with a community of people who also love the icon you’ve come to see.

And with Taylor, you don’t just see her singing. You see her pouring her heart out with every single word. How she does this night after night on tour is beyond me; I can’t imagine how emotionally draining it would be.

Taylor performing the heartbreaking “All Too Well.” Image courtesy of Lilmissnotperfect’s Tumblr. I wish I could find a more clear photo. Taylor had tears in her eyes explaining to us how sometimes an emotion is just so raw, so painful that all you can do is tell the story of what happened and hope for healing through the telling. I think this makes her a poet more than most musicians. ❤

But it was only a touch of sadness, offset by the glamour of pieces like “Lucky One”:

60s-esque glamour in “Lucky One,” complete with dancers and lots of staging. Image courtesy of http://www.pop.com.br.

And downright fun in pieces like “We Are Never Ever Getting Back Together”:

The set for this piece included her band dressed as woodland creatures, with Taylor and the dancers dressed in circus attire. Lots of sparkly confetti, a perfect finale for Taylor’s affinity for all things sparkly (another reason I relate to this girl!). Image courtesy of tasteofcountry.com.

It was beautiful, all of it. The visuals were outstanding and flawless, just like the music. I can’t help but wonder, though, what visual aspects we were missing by being outside. For most artists this might not matter, but at Taylor’s other concerts, I’ve seen her and dancers hang from the ceiling in different contraptions, snow/confetti fall onto the audience (not just the stage), water pour down onto the stage, pyrotechnics galore, etc. It would be interesting to see this tour at a different venue.

My friends and I had a long but fun day for the festivities. We went downtown early, which was good, because at 2:00 p.m. (7 hours before Taylor was supposed to be onstage), the line to get into the parking lot was already 45 minutes. Luckily, we took the train, which meant less hassle but 6 miles of walking–but it was a beautiful day with fantastic company, so that wasn’t too bad. 🙂 We ate at a local pub before heading to the concert. 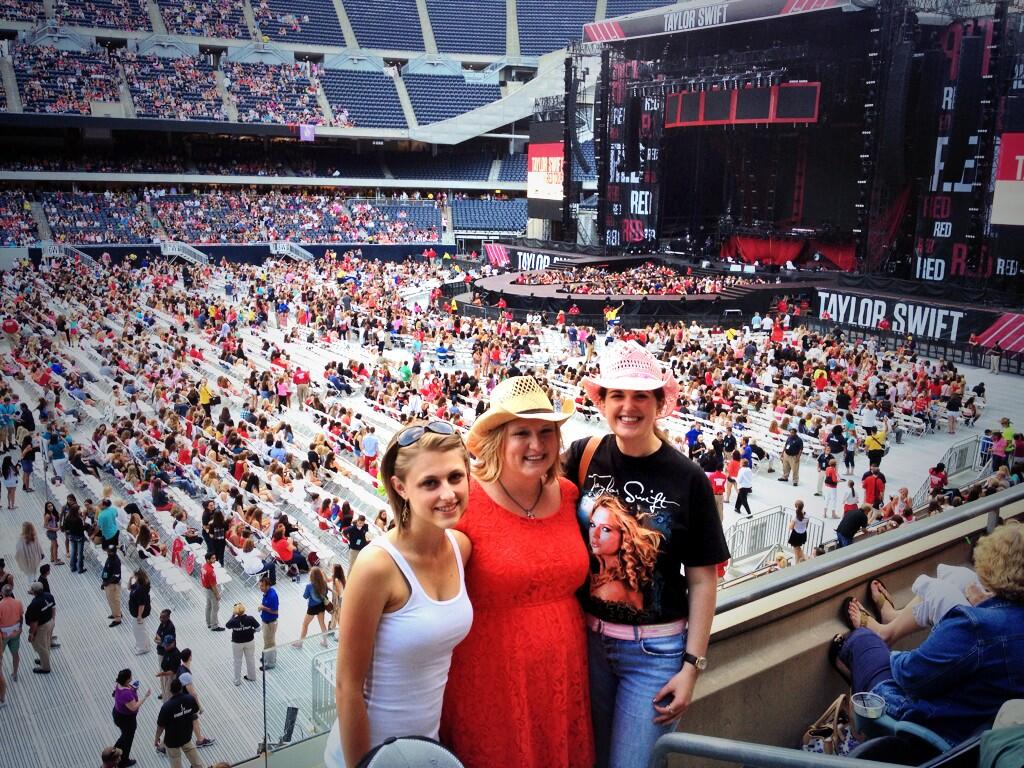 Megan, Lindsey, and I from our section as the stadium filled pre-concert. Alex was camera-shy but took a great picture. 😉

We had great seats! The other benefit of being so early was we got to explore the venue and see all the opening acts. Austin Mahone began the night, making us all feel extremely old as the prepubescent girls around us shook from excitement, screaming at the top of their lungs, for this teenage pop star whom we were entirely unfamiliar with. There was a target audience for each of the three opening acts, however, culminating with Taylor’s duet partner, Ed Sheeran, whose music was decidedly more adult.

Taylor played for almost two hours, which was quite impressive. We were delighted, exhausted, and a mix of silly and silent on the train ride home, having already tired our voices and energy out with extreme dancing and singing at the concerts. We had to show the eight-year-olds how it’s done. SO, I love Taylor more than ever and can’t wait to see her next tour! ❤

Another review in the news, if you’re curious to read.

In other musical performance news, I got to see the most adorable musical tonight. Several of our pediatric patients at Marianjoy put on a performance of “E-I-E-I-Oops,” under the direction of several of our therapists and volunteers. It’s a story about a cow who can’t “moo,” and the other barnyard animals try to help him find his voice. It’s adorable, and the kids did a wonderful job.

I got to see many of the same kids in the performance last year, and it’s wonderful to see how much they’ve grown and blossomed. I love that Marianjoy gives them a stage on which to shine; I think it helps them build their confidence for life outside of Marianjoy, too. It’s one of the staff’s favorite events all year; seeing such lovable results reminds us how important and fruitful all our hard work is.