This Thursday marked the birthdays of sci-fi legend Ray Bradbury and impressionistic composer Claude Debussy, two of my favorite artists.

I must confess something truly embarrassing for such a dedicated sci-fi fan like myself: I only recently discovered Bradbury. During my speculative fiction writing class at DePaul, there was one day of our class that everyone was in mourning: Ray Bradbury had passed away. Everyone was really upset, and we spent a portion of class time discussing his influence. I knew the name, but honestly, besides the short story “There Will Come Soft Rains” (a short story excerpt from The Martian Chronicles), I had never read him. I kept quiet, because I sensed this ignorance might very well invalidate my status as a sci-fi fan–but I did add him to my “to read” list.

A few months ago, I finally got around to listening to the audiobook for Fahrenheit 451. Every single person I talked to couldn’t believe I’d never read it before; apparently it’s a high school curriculum staple. I quickly discovered why. 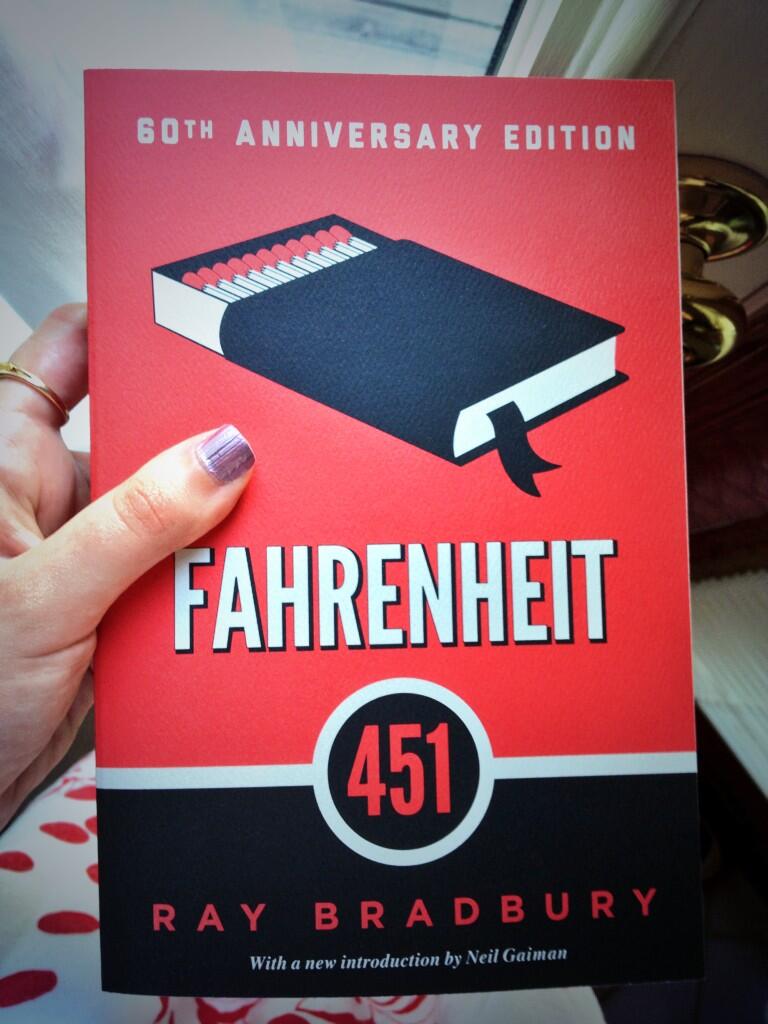 I’m almost not sure where to begin when I talk about how much I love Fahrenheit 451. It’s one of my favorite books of all time. It has a timeless quality to it, seeming more relevant now than when it was published in 1953. The action, plot, and content still cause this classic to be banned even now, let alone in the conservative 50s. But so many important, revolutionary ideas are controversial, and it’s often a badge of honor to be put into that category now.

So why do I love it? I was immediately drawn in from the very first chapter. The language was like candy to me, every word vivid, creative, and evocative. Every image had a purpose, and I found myself longing to jump into the story. I kept rewinding again and again to hear favorite quotes that still stick with me (one of the only inconveniences of audiobooks!). There’s so many good ones, but here is one of my favorites:

“Everyone must leave something behind when he dies, my grandfather said. A child or a book or a painting or a house or a wall built or a pair of shoes made. Or a garden planted. Something your hand touched some way so your soul has somewhere to go when you die, and when people look at that tree or that flower you planted, you’re there.
It doesn’t matter what you do, he said, so long as you change something from the way it was before you touched it into something that’s like you after you take your hands away. The difference between the man who just cuts lawns and a real gardener is in the touching, he said. The lawn-cutter might just as well not have been there at all; the gardener will be there a lifetime.”
― Ray Bradbury, Fahrenheit 451

I also love the story on a plot and character level, too. I will try not to be too spoilery, but my favorite parts might give away a little. However, as I seemed to be the last person on the planet to read this book, hopefully it won’t matter. 😉 Montag is an interesting, appealing character, and his development through the course of the book is fascinating. He becomes a righteous, noble, imperfect hero, as lovable for his ideals as his flaws. Yes, so lovable that I still pine for him as a top literary crush.

This is not me but it could be (with Montag).

THIS PARAGRAPH HAS SPOILERS, so skip it if you haven’t read the book yet. The only things I wanted “more” of were some of the other characters, namely, Clarisse. She was one of the most interesting characters in the whole book, yet she had minimal coverage, other than being “ignition” (pun intended) for Montag’s change. I also wanted more of a conclusive ending; I actually thought I was missing a CD from the audiobook when it ended. I felt left hanging, on the brink of the most exciting part yet. However, with what we are given, we can definitely derive an emotion, which I’m sure was Bradbury’s goal: hope. [/END SPOILER]

In my research for this post, I was ECSTATIC to discover there was a sequel of sorts: a video game of the same title, released in 1984, to which Bradbury contributed heavily. Although I doubt a playable version is readily available, this website plays a video walkthrough of the whole game, just over an hour long. I can’t wait to watch! I’m really happy Bradbury worked on this, because otherwise, I don’t think I’d be able to watch it. This book has become so sacred to me that I don’t even trust any movie adaptations to get it right, something I’ve never felt with any other book. It is such an intricate balance of language and emotion and action, glued with wonder, that I feel it’d be easier to spoil than get right. But I will gladly, heartily participate in other levels of fandom:

Now, it’s even easier to display my intense admiration of this book, with this treasure I found exclusive to my favorite bookstore, Anderson’s Bookshop.

Google commemorated Debussy’s birthday by dedicating their homepage to him with a beautiful video. When you clicked “play,” the button floated away as a balloon and the song “Clair de Lune” played. A nighttime turn-of-the-century river was the backdrop for the adorable animation of people finding each other, with lights flickering in time to the music. I was captivated. It’s a special song for me, one that my dad and I have always loved. The Washington Post (yes, the newspaper from my previous post) wrote a great article about the video, praising it as a surprising and poignant cinematic direction for team Google Doodles. Although the song has been a favorite of mine for years, TWP taught me of its origins: “Debussy, like fellow French composer Faure, himself found inspiration in a countryman, Symbolist poet Paul Verlaine, and his 1869 collection ‘Fetes galantes.’ The poet even seems to beckon musicians with the lyric: ‘Their song blends with the light of the moon.’” Maybe that’s why I’ve always found the song so transfixing; it captures the majesty of the night, ripe with poetry and music (I’ve always been a night owl myself; you can’t time inspiration, I say). It’s interesting to see yet another layer of adaptation added: scenery–>poem–>music–>video, now, all-in-one. Google’s homepage changed at midnight, but luckily, the video has been added to YouTube, and many articles have been written about it.

How lucky we are to have all the great works these talented artists have left behind for us. If you haven’t experienced them yet, I hope you get a chance, soon.