A week ago, I had the great experience of going to a Chicago a Cappella concert with my mom. I actually won the tickets on WFMT, my favorite classical music station, for answering a quiz question correctly. 🙂

I’d never really been to an a cappella concert before, save for the ones my friend Kara’s choir sang in high school. I wasn’t sure what to expect, but if WFMT was promoting it, I knew it would be good. I invited my mom to go with me. 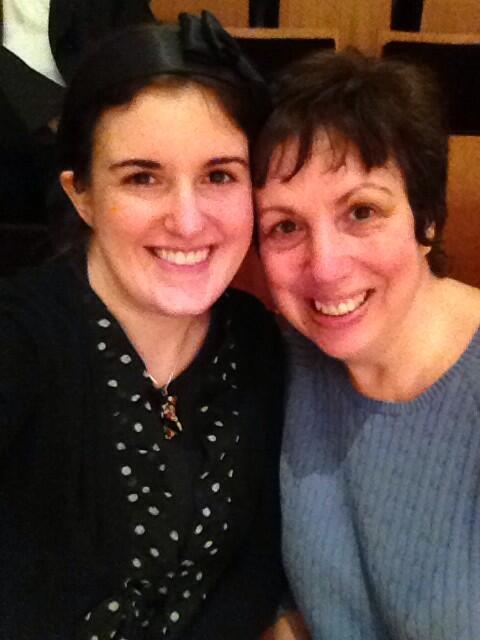 My mom and I snapped a picture during intermission. We had such a great time! 🙂
I’m looking a little severe in all black, but let’s just say it’s festive for Halloween season. My mom, of course, looks beautiful as always! ❤

We were blown away immediately. The nine voices of the choir blended together so richly, yet you could still hear individual qualities. We were impressed not only with the immaculate quality of every selection, but also the wide range of genres they chose. Since it was their 20th Anniversary celebration, their theme was “best of” from the last 20 years of their performances.

The musical director gave a short explanation before each piece, just enough to get a sense of the song. While all the songs were fantastic in their own ways, there was one in particular that my mom and I really liked. It was the second one they sang, and we were transfixed by it. The song was in Swedish, but the music was haunting, and with the snippet beforehand, we felt the song just as intensely as if we knew all the words. I even had tears in my eyes.

I wanted to share the translation with you, since I found it so beautiful. The lyrics come from a poem, and apparently, the song has become extremely popular in Sweden.

From the Chicago a Cappella program notes:

This song takes place in a miniature world conjured by a poet’s imagination. Gustav Fröding’s finely-wrought poem creates a single beautiful scene, so complete that it feels like it was cut in whole cloth from a Swedish cousin to JRR Tolkien’s Lord of the Rings. (In fact, Fröding and Tolkien both used medieval images and style in their works deliberately, so the kinship is an overt one.) The soaring, plaintive melody and exquisite counterpoint are by David Wikander, a Swedish church musician of the early twentieth century. The piece has carved out such a firm place in Swedish hearts that it is virtually considered to be folk music—a high honor indeed for “composed” music [likely, of the 20th century].

I’m going to post the translation first, since I’m assuming most of my readers speak English over Swedish. 😉 The original lyrics will go after it, though. Please do listen to the audio excerpt available on the Chicago a Cappella website, too; I hope they will include the full version on a CD or MP3 soon.

Lily of the Valley (photo courtesy of Wikimedia Commons)

King Lily-of-the-Valley, he lowers
his sad head so heavy and weak;
and the silver helmet shines
in the pale summer twilight.

Around the bier, a spider weaves
from the “incense place” with floral scent
an incense [that] slowly flows;
the entire forest is full of fragrance.

From the birch’s rocking crown,
from the wind’s waving green house
small songs of sorrow sound;
the entire forest is filled up with whistling.

A message is whispered through the valley
about a king’s sorrow among whispering leaves,
in the wide kingdoms of the forest,
from the capital of the Lilies-of-the-Valley.

An accurate selfie of how I’m feeling right now.

Aren’t those lyrics so lovely and haunting? And “haunting” fits the seasonal theme so well; I just had to share them. I think this elegy is a sweet example of how love transcends time and life itself. All of the nature symbolism shows us that the princess isn’t really gone; she is everywhere, in everything. Her people, especially her father, keep her memory alive. ❤

10 thoughts on “A Song of Beautiful Sorrow: Kung Liljekonvalje & Chicago a Cappella”